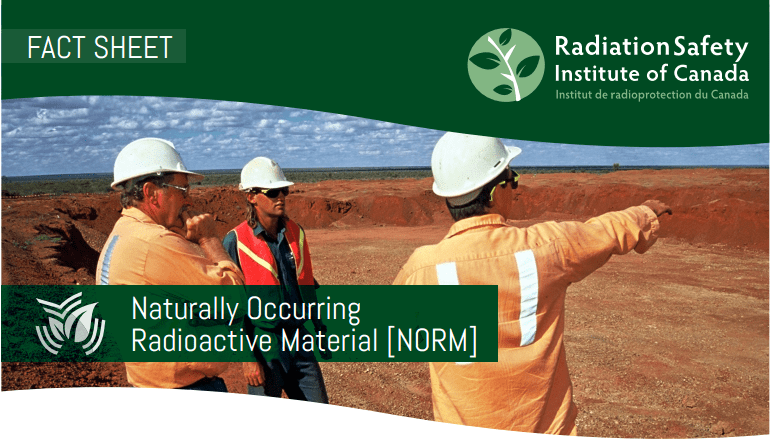 Some radioactive materials, often referred to using the short-form of “NORM”, exists in the earth’s crust naturally. The decay of thorium and uranium produces many different types of radioactive materials, called isotopes. Some examples of these isotopes are Radium-226, Potassium-40, and Radon-222. These isotopes of NORM are generally found in the earth’s crust in low concentrations.

Why are we concerned about NORM?

NORM can come to the earth’s surface due to natural processes (radon gas moving through cracks in rocks or dissolving and being transported by ground water flows), or due to human activities (mining, oil and gas extraction, etc.). Additionally, the human activities that bring NORM to the surface may cause NORM to become more concentrated than its natural state. For example, coal ash from coal-burning power plants contains a more concentrated form of NORM than the coal did when it was taken from the ground. Because NORM is radioactive, once it is brought to the surface or concentrated, the ionizing radiation that it emits can now interact with humans. Where is NORM usually found?

What are the health risks? How is NORM regulated?

In Canada, NORM is regulated by the individual provincial and territorial governments, each having its own set of rules and regulations on the handling and disposing of NORM. In addition, the “Canadian Guidelines for the Management of Naturally Occurring Radioactive Materials (NORM)”, published by Health Canada, was developed by the Federal Provincial Territorial Radiation Protection Committee to harmonize standards throughout the country. Additionally, in certain situations, transportation of NORM falls under the federal regulations on the use of radioactive material, under the Nuclear Safety and Control Act.

How to minimize exposures

The radiation protection practices necessary to protect workers and the public from NORM will vary depending on the type of NORM present, and its amount or concentration. Protection processes can range from simply being aware of the NORM presence and minimizing time spent in the area, to the implementation of radiation protection programs and the use of engineered controls and personal protective equipment. While the “Canadian Guidelines for the Management of Naturally Occurring Radioactive Materials (NORM)” provides a good overview of protection measures, the local provincial/territorial regulations should also be consulted.