Historically, radon exposure has been the most harmful form of workplace radiation exposure in Canada!

◊ 1980: The Radiation Safety Institute was founded in response to a human disaster in the Elliot Lake uranium mines in Northern Ontario. For years, miners had been exposed to uncontrolled and excessive amounts of radioactive radon gas deep in the underground mines, which resulted over time in the deaths of more than 220 miners from lung cancer.

◊ 1981-1990: In cooperation with senior surgeons and pathologists both at Toronto General Hospital and the Banting Institute of the University of Toronto, and with the support of some 150 family physicians in Northern Ontario, we established, for Ontario uranium miners, what became the world’s largest early lung cancer detection and treatment program and the program was paid for by the uranium companies.

There was consensus among all stakeholders that we should consolidate our efforts, consequently we built our National Laboratories in Saskatoon to provide both scientific and technical expertise in radiation safety and to provide specialized monitoring services to assist the companies to better protect the mine and mill workers and to comply with the new federal and provincial regulations.

Our reports and conclusions were presented to the joint federal-provincial environmental assessment panel by the mining companies. In its own final report, the joint panel specifically praised our work for its clarity of thought, expression and sense of purpose.

◊ 2000: The new federal Nuclear Safety and Control Act and Regulations were publicized and the Radiation Safety Institute’s unique radiation monitoring service, Personal Alpha Dosimety for uranium workers, became the first in the world to qualify for a government licence under the new rigorous national standards.

Today: As the only licensed Personal Alpha Dosimetry service in North America, Radiation Safety Institute of Canada has played an active and influential role providing specialized monitoring services to assist the companies to better protect mine and mill workers and to comply with the federal and provincial regulations.

Radiation Safety Institute of Canada Personal Alpha Dosimetry (PAD) service is the only licensed Personal Alpha Dosimetry service in North America capable of measuring the actual exposure of individual workers to alpha radiation from radon and thoron progeny and long-lived radioactive dust (LLRD). We use world class, patented technology in our personal alpha dosimetry (PAD) service. There is simply no better system available in Canada for monitoring the radiation exposure of individual workers from radon and thoron progeny and from (LLRD).

*The inspection showed that out of 4,393 Nuclear Energy Workers, none were overexposed to radiation. 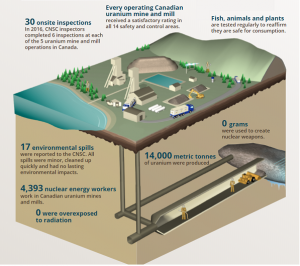 *The Info-graphic courtesy of CNSC

The Radiation Safety Institute of Canada’s PAD system consists of a detector head and an air sampling unit, worn together on a worker’s belt. At the end of each month, the head is removed and replaced by a new

one. The used head is sent to our National Laboratories in Saskatoon, Saskatchewan for processing. Transport of the used heads is easy, quick and efficient. The PAD Service includes laboratory analysis, technical support, on-site equipment, quality assurance, quality control and timely reporting of results, including early alerts. Results are sent to clients and can also be sent to Health Canada’s National Dose Registry (NDR). 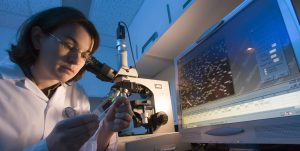 The Radiation Safety Institute of Canada’s Alpha Spectroscopy Service is also available to clients for further analysis of LLRD samples to determine radionuclide composition and abundance.