Preventing Cancer Before it Starts 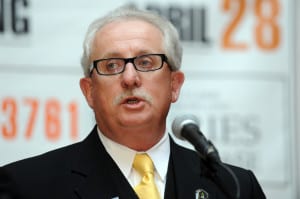 At the outset, 2012 was promising to be a good year. My six years as Chair of the Workplace Safety and Insurance Board was coming to an end and before taking on any other assignments I was planning on taking a break, slowing down, maybe play some golf and spend time with my family.
Cancer had other ideas.

One Sunday in early March, I awoke with a huge lump on the side of my neck. My wife said it looked like I had swallowed a golf ball. Monday began with an early visit to the doctor’s office and a frightening diagnosis of cancer of the tongue.

I was terrified. I blurted out to the doctor, “Will it kill me?”

The answer: “Yes, without quick and aggressive treatment.”

As far as cancers go, I consider myself lucky. We caught it early and I was given a positive prognosis. But that didn’t make it easy. No matter your odds, cancer changes your life completely. You immediately become a patient; and with radiation treatments, chemotherapy and seemingly endless trips to the doctor, being a cancer patient is tough. It changes your lifestyle. I could no longer eat or drink by myself, having to be fed through a tube. I had enjoyed the odd cigar (determined not to be the cause of my cancer). Obviously, I could no longer do that.

My treatment and recovery took six months. We won the fight, but once you live through cancer the threat of recurrence always hovers nearby. Regular check ups continue to be part of my schedule.

As I was fighting my personal battle with cancer, I often thought what I could have done differently to prevent it. I thought about other cancers and whether they can be prevented. I pondered our overall occupational prevention strategy and what could be done to strengthen it.

As they say, an ounce of prevention is worth a pound of cure.

Call it fate, but I had been interviewed to fill the President and CEO role with the Radiation Safety Institute of Canada, an independent, national non-profit organization committed to preventing cancers due to unnecessary exposure to radiation in the workplace.

It was noon on September 12, 2012, when the doctors told me the cancer was gone. All clear. Clean. And not likely to return. One hour later, I started my new job at the Institute. There was no way I could turn down this offer. Now that my personal battle with cancer is over (although it is never really over), I am proud to be part of an organization that carries the legacy of a 35-year commitment to promotion of radiation safety in the workplace, home and the environment.

We are fighting cancer before it starts, and I wholeheartedly believe this effort is saving lives.

The statistics are staggering: two out of five Canadians are expected to develop cancer during their lifetimes. It is hard to say how many of these can be attributed to overexposure from radiation, and even more challenging to determine where such exposure actually came from. But we do know that unacceptable exposure to radiation increases our risk of developing cancer. By doing what we can to educate people and reduce the risk by controlling known potential hazards — at work and at home — we are making progress.
All of us at the Institute passionately believe that every effort we make today to reduce the risk of exposure to radiation benefits the long-term health of Canadians.

The Institute was founded 35 years ago when 220 miners from Elliott Lake had their claim approved by the Worker Compensation Board in Ontario. All were exposed to radon while working in uranium mines, and all of them died of lung cancer. It is our mandate to make sure this never happens again.

Because radiation is ubiquitous in Canada — whether the result of man made machines or Mother Nature herself — the Institute works with many different industrial sectors to ensure they have the right awareness and prevention measures in place. We protect miners, radiation technicians, family homes, schools, businesses with enclosed spaces, public buildings, X-ray technicians, dentists, veterinarians and many others who are potentially exposed.
It is a daunting list.

It is too easy to assume that problems with radiation only occur in places like Chernobyl or Fukushima. Sensational stories wake people up. The reality is that cancer arrives in too many instances, and too often it does so without warning.

With our partners, we are committed to preventing these cancers from ever arriving in the first place.