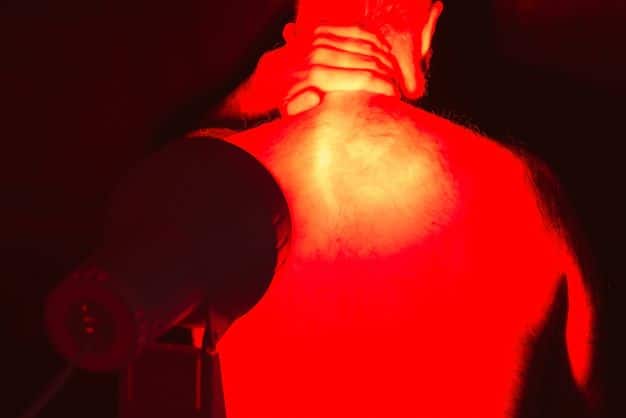 A plethora of therapeutic uses have been suggested for different wavelengths of light. Some of these uses are supported by extensive clinical research. Others uses are highly speculative, with minimal evidence at best. In the “messy middle” are a series of potential uses for some types of light, where there may be real utility, but it is not 100% clear for which patients, and under which circumstances the treatment is useful. In this blog post, I address the recent enthusiasm for “red light therapy” to see where it fits currently. As always, note that science progresses – I am basing this text below on my review of the literature, but new information is sure to arise that may well be discordant with my current conclusions.

What is red light therapy?

The most common intent of red-light therapy (RLT) is to use red light to cosmetically reduce the prominence of wrinkles and stretch marks. It has also been proposed for reduction in scar tissue and to improve wound healing. There have been a wide range of uses promoted by some RLT vendors, however, including improving hair growth, treating carpal tunnel syndrome, treating rheumatoid arthritis, treating depression, detoxifying the body, boosting the immune system, reducing cellulite, helping in weight loss, curing acne, and treating cancer.

How Does it Work?

In theory at least, RLT works by first having light photons absorbed by mitochondrial chromophores in skin cells. So what the heck are “mitochondrial chromophores”? Mitochondria are specialized structures within cell membranes that generate most of the chemical energy needed to power the cell’s biochemical reactions. Chromophores are just the molecules within the mitochondrial responsible for its colour and thus the part responsible for capturing light energy. Once the red light energy has been captured, a variety of possible events may occur. Some of these include increases in blood flow, changes in chemical signals among cells, and the activation of stem cells. In theory, this could have beneficial effects on wrinkles, scars, and healing of burns. Since the treatment is non-invasive in nature with few, if any, side-effects, making further exploration of RLT very attractive to physicians. Note, however, that the details of how RLT works is not fully understood as yet, which adds to the uncertainty about when it should be used. There are uncertainties about the cellular mechanisms responsible for translating signals from the photons incident on the cells to the biological effects that take place in the tissue.  Another major issue is that there are a huge range of potential ways of using RLT: what wavelength is best?, how much power is needed?, should it be pulsed or continuous wave light?, is coherent laser light required?, how long should a tissue be irradiated to elicit a response? How often should the irradiation be repeated?  Given the large number of treatment variables to explore, and the lack of understanding of the underlying biological mechanisms (which, if known might help guide parameter optimization), it is not surprising that there is still uncertainty about how best to use RLT. Many published studies on RLT show some entirely negative treatment results. These negative results could simply be due to any number of factors, including an inappropriate choice of light source, an inappropriate dosage, inappropriate preparation of the patient’s skin before light application (e.g., lack of removal of makeup and oily debris) or failure to account for individual skin pigmentation.

Most competitive skin rejuvenation techniques are “invasive and ablative”. The main concept of most of these treatments is to remove the outer layer of skin, inducing a controlled form of skin wounding in order to promote growth of new skin, hopefully without the previous signs of aging. While these techniques can be successful, they generally require intensive post-treatment care, prolonged recovery time and may lead to complications such as long-lasting skin reddening, pain, infection, bleeding, and scarring. RLT, in contrast, is a non-thermal, non-ablative skin rejuvenation has been shown, in some cases, to be effective for improving wrinkles and skin laxity. Clinical trials of RLT have been published in the medical literature showing there has been a measurable improvement in skin texture and appearance of individuals with aged skin using RLT.

Will it work for me?

A friend who uses RLT told me that “RLT was supposed to take 20 years off my age and that hasn’t happened”. As a medical scientist who has previously been involved in multiple clinical trials, this kind of statement brings up one of the differences in perspective that the people running a trial and patients reading about the results of a trial may have, particularly when the trial reports a “significant” or “measurable” effect.  For example, assume there was a trial where patients were divided into two groups, one of which was given a new treatment and one was not. The scientists reporting the results state that there was a “significant improvement” in the outcome for the treated versus untreated group. In the context of reporting the outcome of a clinical trial “significant” must be read as “statistically significant” – which means, in this case, that the difference in response for the treated versus the placebo group was greater than the normal statistical variation within the members of the groups over the period in question. “Statistical” significance therefore, depending on how much variation there is, may be a very small change in response between the two groups. It also does not mean that every member of the “treated” group necessarily saw an improvement versus the untreated group – in some trials, you can get a statistically significant difference between groups based on big improvements with a few individuals with no response in most members.

If you go to a vendor website for RLT, you will likely see wide ranging claims for the benefits, including repair of sun-damaged skin, reducing postpartum depression, reducing pain, improving physical performance and general increase in energy. This is not surprising – I’m not likely to buy anything if the seller does not convince me I can get benefit from it. A problem arises when you dig into the basis for these claims. Ideally the basis will be the results of studies published in the peer-reviewed scientific literature. The good news is that there are a fair number (although not a lot) of scientific studies of RLT. In addition, reviews of these studies suggest that RLT is a “promising” and “safe” treatment. The bad news is that most of the existing studies are for small numbers of subjects in very controlled situations, which makes it quite difficult to extrapolate results to less controlled use of a different type of RLT by subjects who do necessarily have the same issues as those studied in the published studies. The biggest issue that makes it difficult to accept all RLT vendor claims at face value is that the scientific papers tend to include a statement like “large randomized controlled trials are still needed to establish the safety and effectiveness of this new treatment.” In addition, some RLT vendors seem to misunderstand the published results. One such RLT vendor referenced a review of “transcranial photobiomodulation” for the treatment of patients with depression but did not seem to realize that the paper in question indicated that the wavelengths and energy density suitable for this treatment did not match with that vendor’s RLT system at all.

Skin rejuvenation via RLT appears to have the most scientific support for being something that might be accomplished with the commercially available systems. However, there are still questions to answer. The wavelength of light used in research studies don’t always match up with the commercial systems’ wavelengths, but this may not be too important an issue for skin rejuvenation. For example, there is some evidence that the “right intensity” of a range of red and infrared light may be beneficial. The “wrong intensity” of the same light may cause skin damage.

Not for everything. There does not appear to be clear evidence that existing commercial RLT systems are effective for some of the “wilder” claims out there. For example, there is currently little or no evidence of effectiveness for curing cancer, helping weight loss, boosting the immune system, or treating depression. Note that RLT can be used as part of photodynamic therapy for cancer and this has been effective. In this case the light does not treat the cancer directly but activates a drug that then treats the cancer.

Probably for some things for some people. There is reasonable evidence to support the use of RLT for improving skin complexion and reducing wrinkles, repairing sun damage to skin, reducing the visibility of scars, promoting wound healing, and reducing side effects of cancer treatments such as oral mucositis (mouth sores).

One issue that suggests the evidence for RLT is not yet strong is that insurance companies don’t currently cover its cost.

RLT seems to still be situated in that “messy middle” of treatments that may have utility, but it is not clear for which patients, and under which circumstances. If you are looking for a relatively safe, non-invasive method of improving your complexion and reducing wrinkles, red light therapy is something to consider – but, as usual, don’t expect miracles. On that note, I’ve recently significantly reduced the visibility of my extensive facial wrinkles – I just keep my N95 mask on…