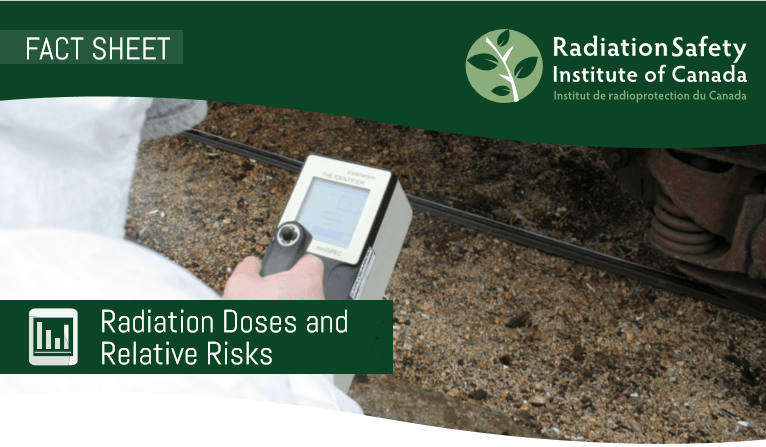 Radiation is a generic term scientists use when describing the emission of energy. For example, the signal from a radio station radiates away from the antenna. When most people hear the word radiation, they are likely picturing ionizing radiation, such as that associated with x-ray imaging or nuclear power.

Ionizing radiation is often due to an atom having too much energy. Such an atom is said to be unstable. Unstable atoms can emit particles such as electrons, neutrons, or protons away from the nucleus to become stable. This process is referred to as radioactive decay.
It is referred to as ionizing radiation because these emitted particles have a lot of energy! When they pass through matter, they can separate electrons from an atomic nucleus. If the radiation passes through human tissue, this ionization can cause damage to cells, including DNA. HOW IS RADIATION MEASURED?

Typical sources of typical background doses to Canadians are: Due to geological and geographic differences, people living in different regions within Canada may receive different annual radiation doses. For example, in Winnipeg where there is more radon present in buildings the annual dose may be about 4 milli-Sieverts, whereas in Vancouver it is closer to 1 milli-Sievert.

WHAT ARE THE RISKS?

There are two main types of biological effects where radiation is concerned: deterministic effects, and stochastic effects.

A stochastic effect is one in which we can only attribute a certain probability of risk. An example of a stochastic health effect would be the risk of developing lung cancer after smoking. If a person smokes it cannot be said for certain that they will develop lung cancer, only that it increases the likelihood of developing lung cancer. The same is true with radiation exposures. Due to possible DNA damage, small quantities of radiation received over long periods of time may increase the likelihood of developing certain types of cancers. The current understanding of long term radiation exposures is that for a typical population of workers there is a 4% increase in cancer risk per 1000 milli-Sieverts of radiation dose received. Based on 2010 estimates, approximately 1 in 4 (25%) of Canadians will die from Cancer. Therefore, if a person were to receive a dose of 10 milli-Sieverts, this would increase the probability from 25% to 25.04%.

The regulatory framework in Canada currently sets the maximum legal dose a worker can receive. The dose limit is based on balancing workplace hazards and is set at, on average, 20 milli-Sieverts per year. This implies that if a person was working with nuclear substances and got the highest allowable dose every year, for 50 consecutive years during their career, their total lifetime dose would be 1,000 milli-Sieverts. This would represent an increased cancer risk of about 4%. In practice, it is incredibly rare to find a worker who exceeds this dose limit, and in fact workers are required to wear devices that monitor their exposure if they are likely to approach even 10% of the dose limit.