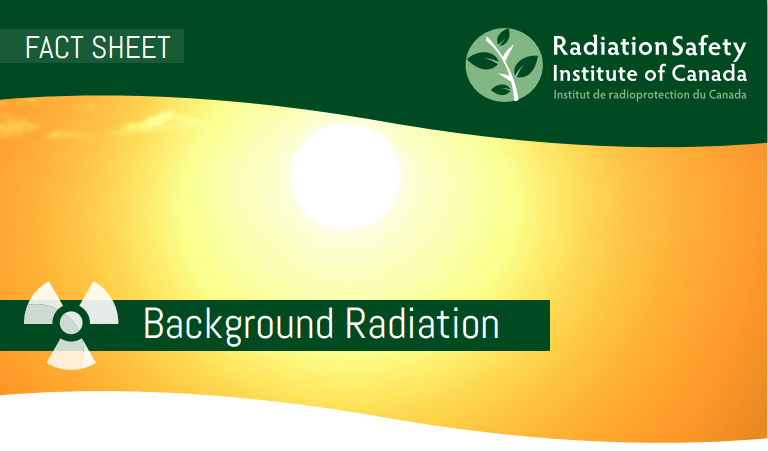 Radiation can be defined as the emission of energy in the form of waves or particles through space or through a material medium. The word radiation comes from the phenomenon of waves radiating, meaning travelling outward in all directions from a source. Radiation has always been present all around us.

Radiation can be ionizing and non-ionizing, depending on its ability to knock electrons out of the orbit of atoms when travelling through a medium. The ionizing radiation can cause damage to matter, particularly living tissue. At high levels ionizing radiation is therefore dangerous, so it is necessary to control our exposure. While humans possess no senses that can detect or feel radiation, radiation is readily detected and measured with instruments, and exposure can easily be calculated and monitored. How is Radiation Exposure Measured?

In order to measure the health effect of low levels of ionizing radiation scientists use a unit called the “Sievert” (Sv). The Sievert is used to represent both the risk of the effect of external radiation from sources outside the body and the effect of internal irradiation due to inhaled or ingested radioactive substances.

Since one Sievert would represent a very large dose, in practice the milliSievert (mSv) is commonly used (1 milliSievert represents a thousandth of a Sievert).

Earth is continually bombarded by radiation coming from outer space originating from the sun and other celestial events in the universe. Much of this radiation is absorbed in the atmosphere, but some will go through and will become absorbed by humans. The radiation dose a person receives from cosmic radiation varies and will depend on the location and altitude.

This radiation is much more intense in the upper atmosphere, around the 10 km altitude typical for airline flight paths, and hence is of particular concern for airline crews and frequent passengers. During their flights airline crews typically get an extra dose on the order of 2.2 mSv per year. [2] This is the radiation coming from the earth’s crust due to the presence of naturally occurring radioactive substances such as uranium, potassium and thorium. From deposits in rocks and sediments, these radionuclides may migrate into soil, water and air. Some traces of these elements can also be found in building materials and so exposure to natural radiation can also occur indoors.

Part of the uranium decay chain, radon is a radioactive odourless and colourless gas. Its presence in the soil varies largely by location. The only known health risk associated with high levels of radon in indoor air is an increased lifetime risk of developing lung cancer. [3, 4] Testing for radon concentrations in your home is therefore recommended no matter where you live in Canada. [5] Some of the essential elements that make up the human body, mainly potassium and carbon, have radioactive isotopes that add significantly to our background radiation dose. Other radioactive elements are present in the food and drink that we consume daily. One example is bananas which are naturally radioactive due to Potassium-40, which is a radioactive isotope of potassium. Note that you should not avoid eating bananas because of this – for example, you would have to eat about 70,000 bananas to receive the same radiation dose as you would receive from one chest x-ray CT-scan.

If you want to estimate your annual dose of radiation received from different sources you can use the following online calculator: http://fedorukcentre.ca/resources/dosechart/index.php