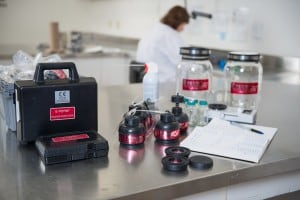 On September 12, 2013, representatives of the Radiation Safety Institute of Canada (“RSIC”) together with the Ontario Lung Association, were at Queen’s Park to observe debate on Bill 96, Radon Awareness and Prevention Act, 2013. The bill was tabled by the MPP for Etobicoke North, Dr. Shafiq Qaadri, and successfully passed Second Reading in the afternoon.

“There is a troubling lack of public awareness about the harmful effects of radon gas exposure in both the workplace and at home,” says Hon. Steve Mahoney, President of the Radiation Safety Institute of Canada. “We commend MPP Shafiq Qaadri for bringing this bill forward to help address this critical issue.”

Radon is a colourless, odourless, radioactive gas that, according to Health Canada, contributes to 16 per cent of lung cancer deaths in Canada.

Naturally released from the soil, it accumulates in enclosed spaces within homes, schools, industrial buildings and mines. The World Health Organization (WHO) classifies radon as a carcinogen, and ranks it as the second leading cause of lung cancer after tobacco.

A recent survey of 14,000 homes across the country, conducted by Health Canada, revealed that approximately 7 % of Canadians live in homes with radon levels above the guideline of 200 Bq/m3″.

“By supporting the quick passage of this non-partisan Bill, MPPs can help to ensure that all Ontarians have the information and services they need to reduce this serious lung cancer risk and keep their families safe and healthy,” said George Habib, President and CEO, Ontario Lung Association.

If passed in to law, Bill 96 would require the province to actively educate the public about radon gas exposure and encourage homeowners to measure the radon levels in their dwellings. In addition, the bill seeks to mandate the province to measure radon levels in every provincially-owned building, and to take steps to remediate them where necessary. In 2009, the provincial governments of Manitoba and Saskatchewan conducted province-wide radon testing of their buildings.

“We think that the Province of Ontario has an opportunity to take a leadership role in terms of protecting the public from this harmful carcinogen,” said Mr. Mahoney. “We’re hopeful that the initiatives outlined in this bill will be carefully considered by MPPs of all three parties.”

Bill 96 has been referred to the Committee on General Government for further debate and consideration.